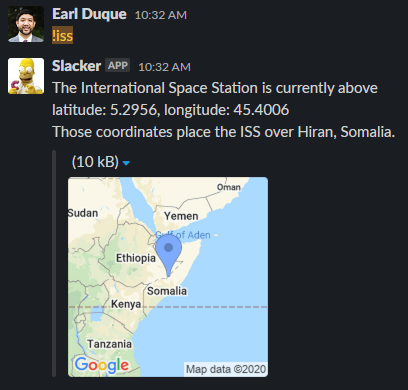 In the spirit of the collaboration between NASA and SpaceX launching astronauts to the International Space Station, I’m digging up an old integration that I made for fun that utilized about a billion APIs so that any user in the sndevs slack channel could find out where exactly (with an included map) is the ISS at that moment.

What: A user would type !iss into chat and my Slacker Bot would inform the chat the latitude, longitude, and city+country of where the ISS is, along with an google maps image to help visualize where.

How: Basically a million API calls and making a cohesive result out of all the integrations:

All in all, it takes about 2 seconds from start to finish!

Also, calling it several times over the hour really shows how fast the ISS orbits our planet! The International Space Station orbits the Earth every 92 minutes at a speed of 4.76 miles per second.

Knowledge 2020 Hackathon Honorable Mention and tips for the future