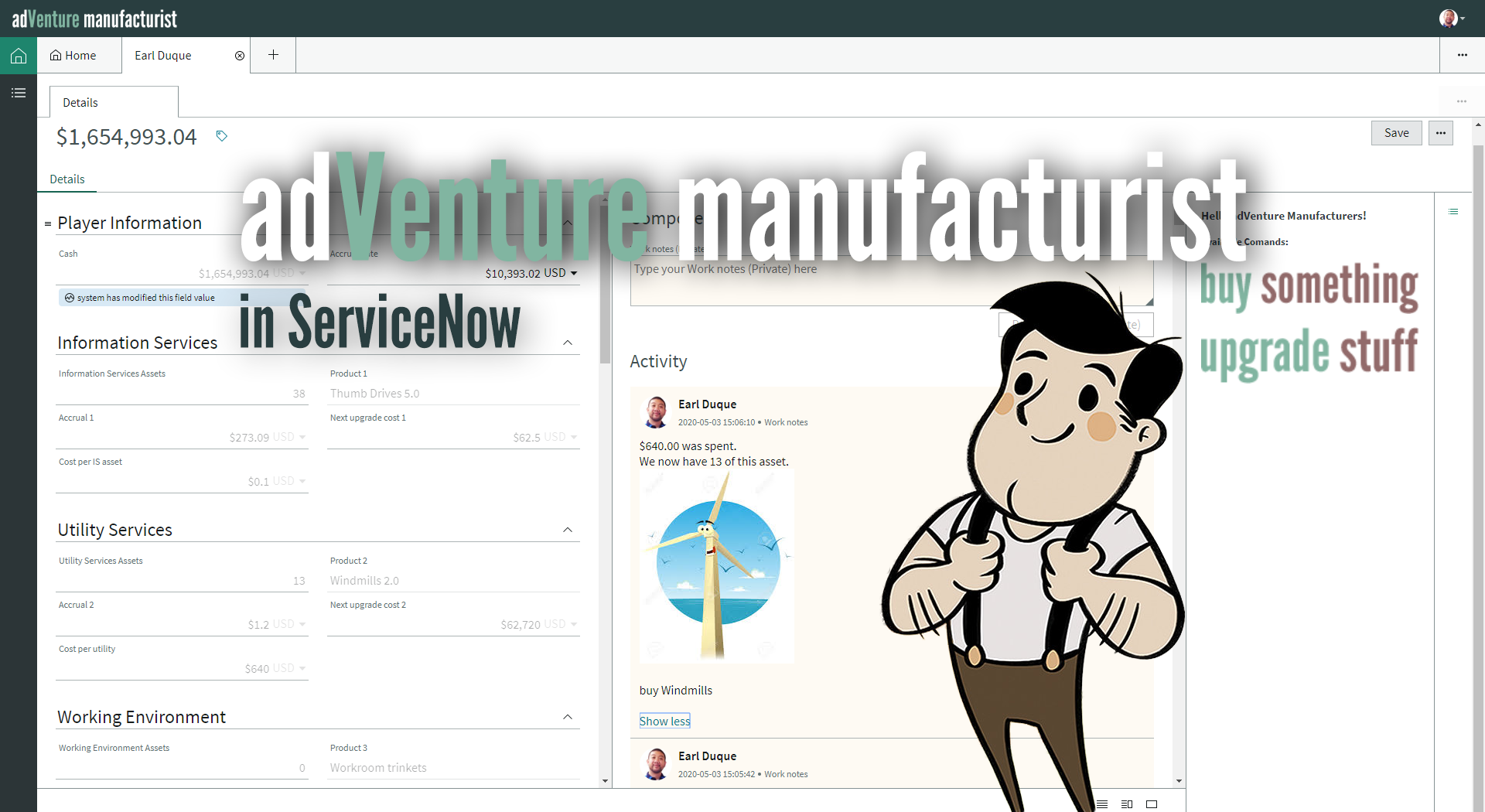 From May 1 to May, 2020, I participated in ServiceNow’s Knowledge 2020 CreatorCon Hackathon. What a mouthful.

And what a weekend! Because of COVID-19, the conference was switched from a 4 day trip in Florida to a completely digital experience, so likewise they changed the normal 8-hour hackathon to a Friday to Sunday “put whatever hours you want into it” shindig.

They also changed the team size limit from 3-4 to 10, me being the dummy that I am entered as a solo entrant of course. Solo at the traditional hackathon isn’t that bad, but when other teams could potentially have 10 people, I probably should have teamed up with others; The quality of other team entries were obviously top-knotch.

Because it was digital, they encourage people to stream their entry. Here’s a screenshot of my stream: 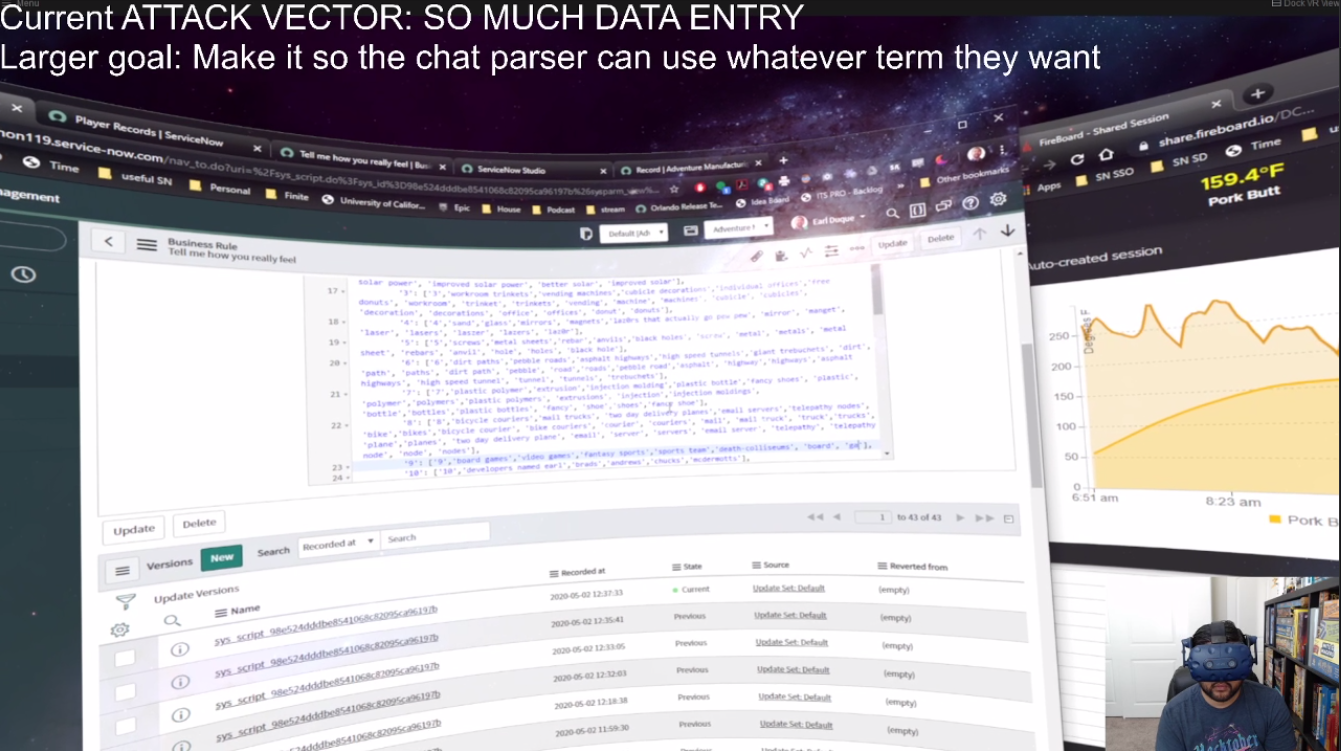 That’s right, I did the whole thing (well like 80% of it) in virtual reality! Why? …why not? I probably spent close to 20 hours in a virtual space with ServiceNow windows and chat boxes flying around me. Streaming to Twitch.tv is fun by itself because chat participation adds a level of zaniness and collaboration to whatever you’re doing, but doing it in VR was an extra level of silly. Especially since I left the “text to voice” bot on and got to experience emoji spam and the like.

My Hackathon entry itself was, of course, a game. Though I tried to call it a simulation as much as possible so that it could actually fit the category I was entering it in. Have you ever played a clicker/idle game before? Well I basically made a clicker/idle game in ServiceNow, specifically the game AdVenture Capitalist, hence the name of my application: AdVenture Manufacturist. Shout out to MGOPW who made this graphic for me: 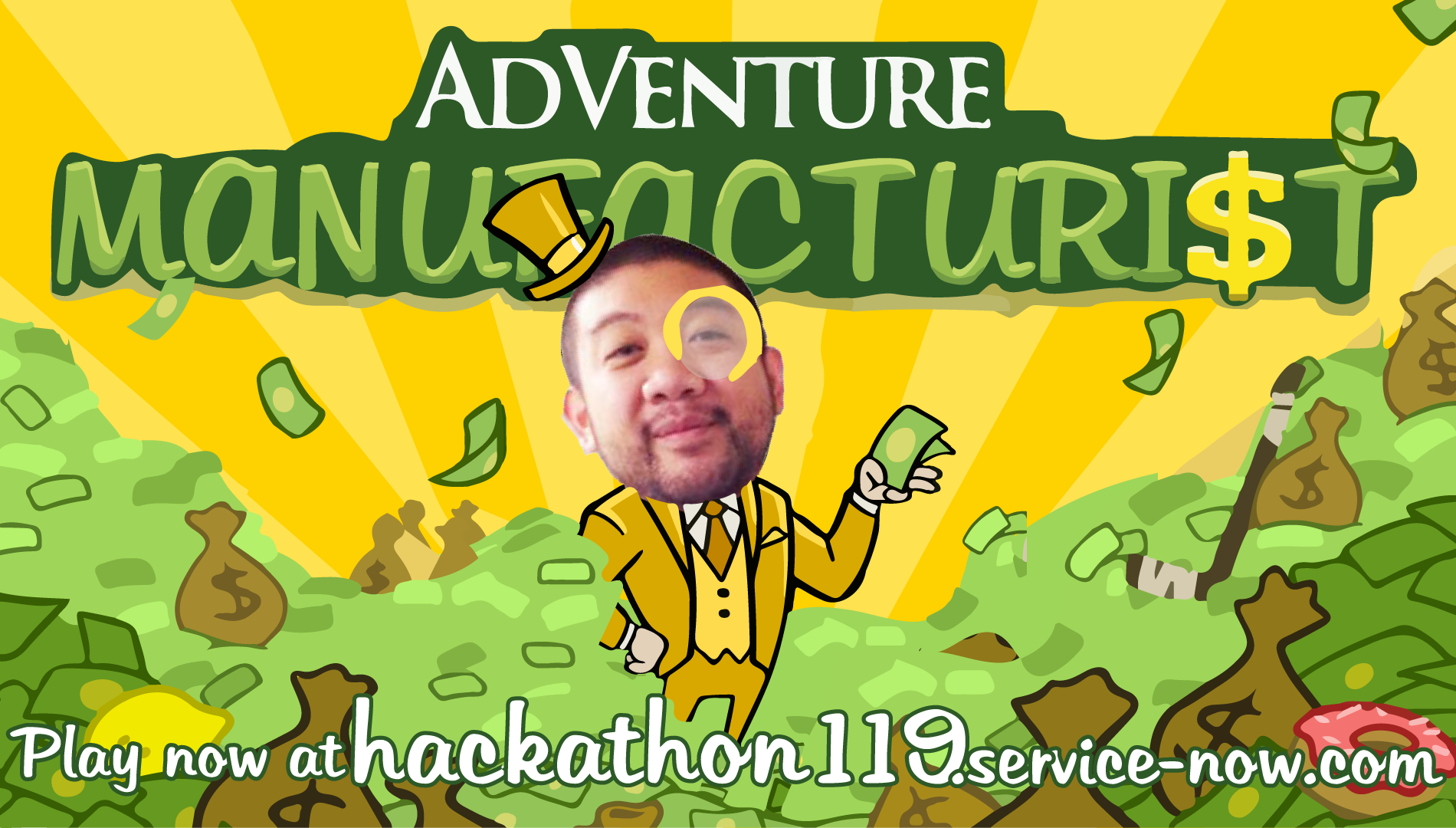 I primarily utilized Agent Workspace as the User Interface, a custom table to hold the data, and a rather zany business rule to handle the meat of the chat parsing (Users would enter commands like “buy paper” into the journal activity and a bot would confirm receipt and give some flavor text). That being said, I probably used at least 20 different platform features to make this thing work.

I also did my first dive into building my first component with the NOW CLI and NOW Experience Framework. I was very excited about this aspect (despite the learning curve) because this framework pushes ServiceNow front-end developers into the modern would where most non-ServiceNow devs operate. Shout out to Andrew Barnes for all the help with troubleshooting. My goal was to post a leaderboard of scores on the sidebar, but even after 4-6 hours of learning this new framework, I was only able to display images and text.

The last half-day of the weekend, I spent entirely on making a presentation video. I always tell my colleagues: a successful developer can sell their product just as much as they can build it. I knew I had to stand out from all the entries, so I went my usual route… being weird:

It was a lot of fun! I understandably lost my category to someone who made a more serious entry, but that’s okay. I learned a lot and in the end that’s what a lot of why I wanted to participate.

As a side note, the weeks following the hackathon has been a lot of me playing idle/clicker games ¯\_(ツ)_/¯